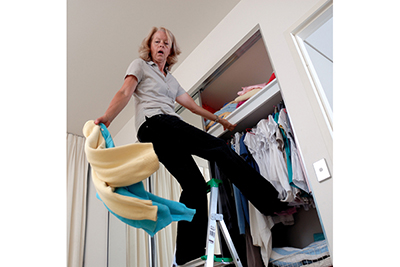 Getting older is no fun and most seniors will tell you to “Never Get Old”. Unfortunately, they still haven’t discovered the fountain of youth so until they do, we must age as gracefully as we can.

One important thing to keep in mind as you age is that the body often ages faster than the mind. There are many times when an older adult who could do a task they may have done 100 times when they were younger should not be doing that task anymore.

For example, if you used to climb a ladder to clean your ceiling fans, but your balance and strength isn’t what it used to be, then you should not be on that ladder or cleaning those fans.

A wise senior will know when it is time to stop with chores that are becoming too difficult because this is what often leads to a life changing fall or injury.

Asking for help does not mean you are becoming “less” than you were before. As we go through the stages of life, we must realize what is appropriate for us to do at any given time based on our abilities and skills.

Just because someone has a skill doesn’t mean they have the physical ability. When you no longer can do a chore or job around the house because it is too hard or dangerous, you should call friends, family or hired help to do the task.

We see many people who have sustained an injury from doing something that they should not be doing. Many falls happen in the bathroom and if you fall in there, you will most likely break a bone and/or sustain a laceration.

There are ways to make your home safer so that as you age in your home, the risk of injury can be greatly reduced. Here are a few ways we can help by installing:

These are a just a few of the many products on the market to help you that we can install in your home.

Please think twice before doing a chore or task that could be considered risky for your physical abilities because you want to be able to age as gracefully and as safely as possible. An injury can often be the beginning of the end so it is best to try to avoid one.

Bell House Medical (the home of Master Grab Bar) has been installing safety equipment into people’s homes in Delmarva for many years. Give us a call to make your home safe so that we can help you to avoid a fall.