Before Remodeling your Bathroom Consider This 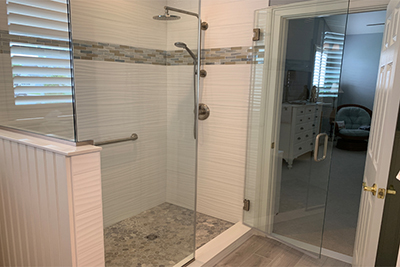 Most of us start out the day with a nice hot shower. The hot water wakes us up and we feel nice and clean afterwards.

The first showers were found in nature. People who had access to a waterfall would bathe there. Personal hygiene was not always a priority or easy. Interest in physical cleanliness became more widespread in the 18th century along with advances in medicine. It became known that good hygiene helped ward off disease and illness, so more people began bathing.

Bathing was a slow and tedious process. Most bathtubs were quite large and it took lots of water to fill them. It was a job because water had to first be heated in the kitchen then carried by buckets to fill the tub. Emptying the dirty bath water after a bath was a chore as well.

The first mechanical shower was patented in England in 1767 and was operated by a hand pump. Showers have come a long way since then. These days many people think nothing of having their bathroom remodeled as there are a plethora of shower types and colors to choose from.

When considering a bathroom remodel, especially if you are nearing or are of retirement age, and are planning to stay in your home as you get older, an accessible shower may be the best type of shower to fit your current and future needs.

An accessible shower can be very beautiful and also functional. So if you have surgery, an illness, injury or any other number of health issues that can cause decreased mobility, balance or strength, you will still be able to use the shower because you can get in and out without even having to lift your leg. Also, the entire bathroom can be remodeled to look fabulous while reducing fall risk and making showering easier for you and your caregiver.

A safe bathroom doesn't have to project a hospital vibe. Modern style choices of accessible showers, toilets and grab bars can make your new bathroom look great while keeping you safe.